The following article is based on a masters thesis completed by Matti Rosenshine in 2016. A full copy of the thesis can be downloaded here.

This thesis aims to explore the relationship between urban enclavism and Modern planning modes. Depicting Modern urban design and planning strategies, prevalent during the beginning of the twentieth century, this thesis explores their possible relationship and impact on the evolution of the fragmented city. Jerusalem’s built fabric is predominantly composed of isolated and segregated enclaves, yielding a socially, economically and environmentally non-sustainable city. Enclave urbanism and spatial segregation is not unique to Jerusalem, rather it has existed for hundreds of years and is prevalent in cities worldwide. Jerusalem’s morphology is often attributed to its natural topography and complex, ethnic, social and political structure. In this thesis I will try to show that these factors have only partially contributed to the cities’ structure, and that other, historic factors have shaped the urban morphology over the past 75 years.

Using Jerusalem as a case study, Modern planning modes, exercised during the British Mandate during their thirty year reign in Palestine, and perpetuated until this very day, are identified as the prime cause of urban enclavism. Positing that planning and design concepts, which might have been appropriate during the early part of the twentieth century are no longer adequate today, alternative modes of thought are explored.

Through a design process, accepted norms are challenged while exploring alternative methodologies reflecting principles of connectivity, continuity, multiplicity and heterogeneity.

Finally, this thesis offers a set of design principles and tools intended to form the basis for the creation of sustainable cities. 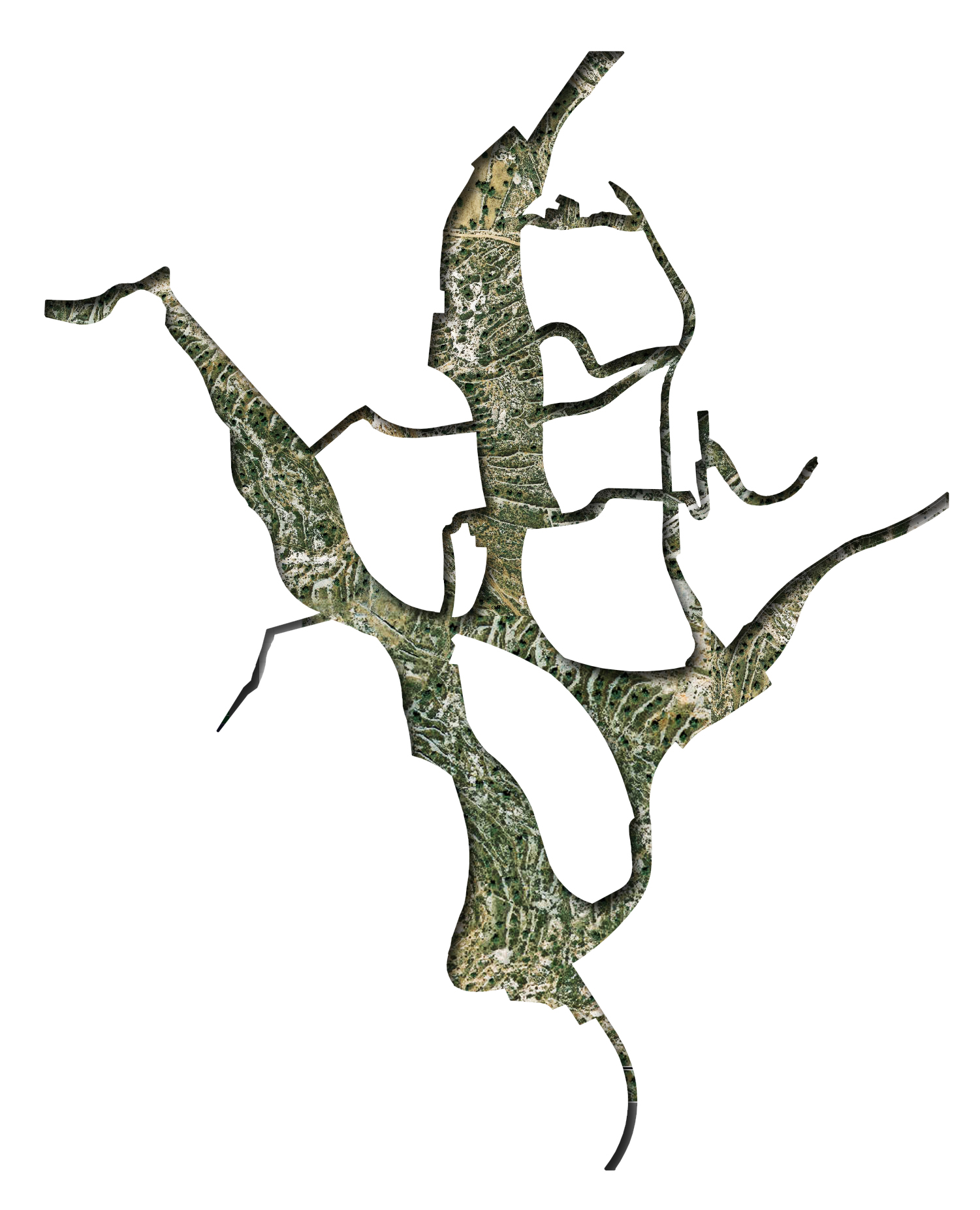 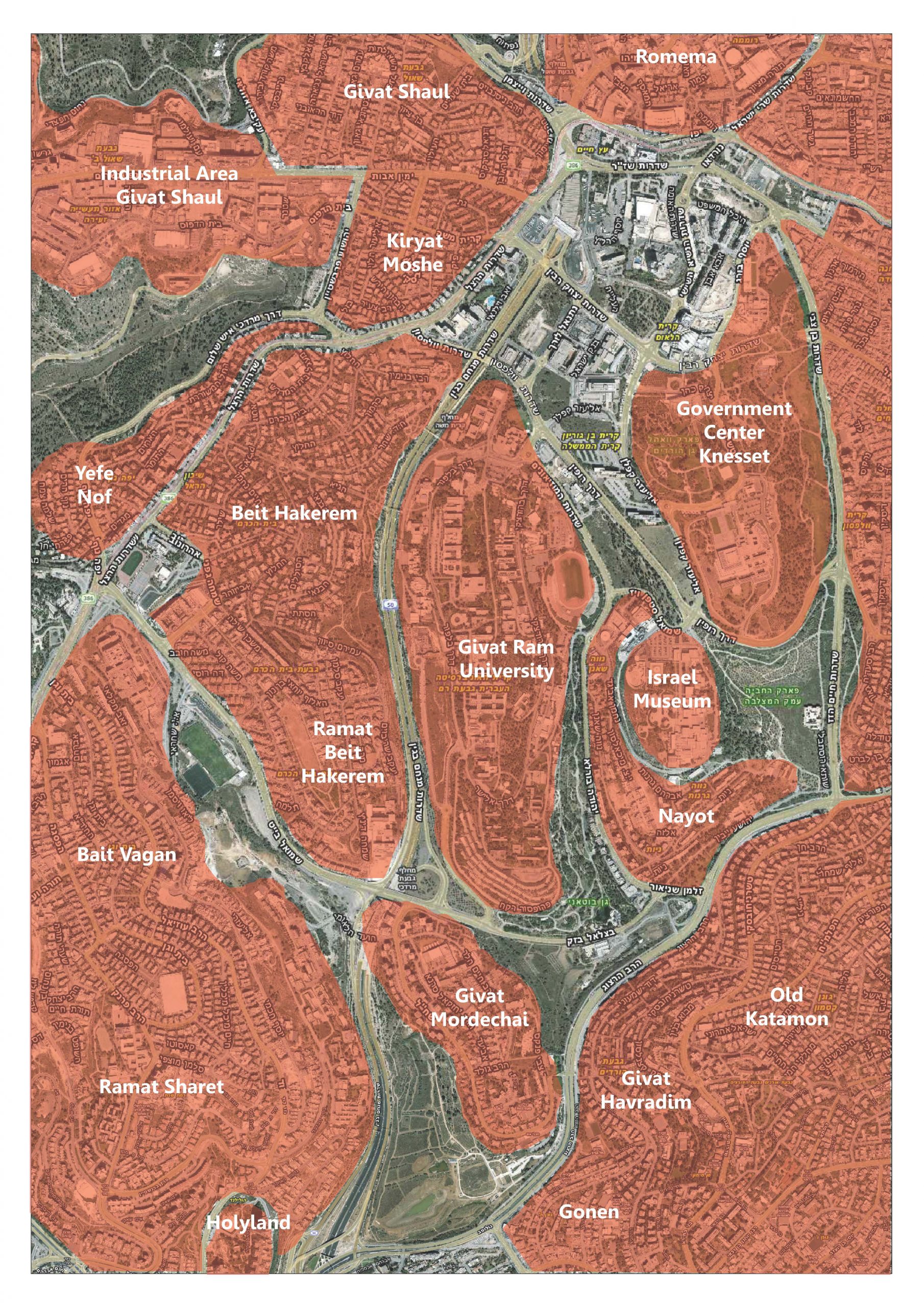 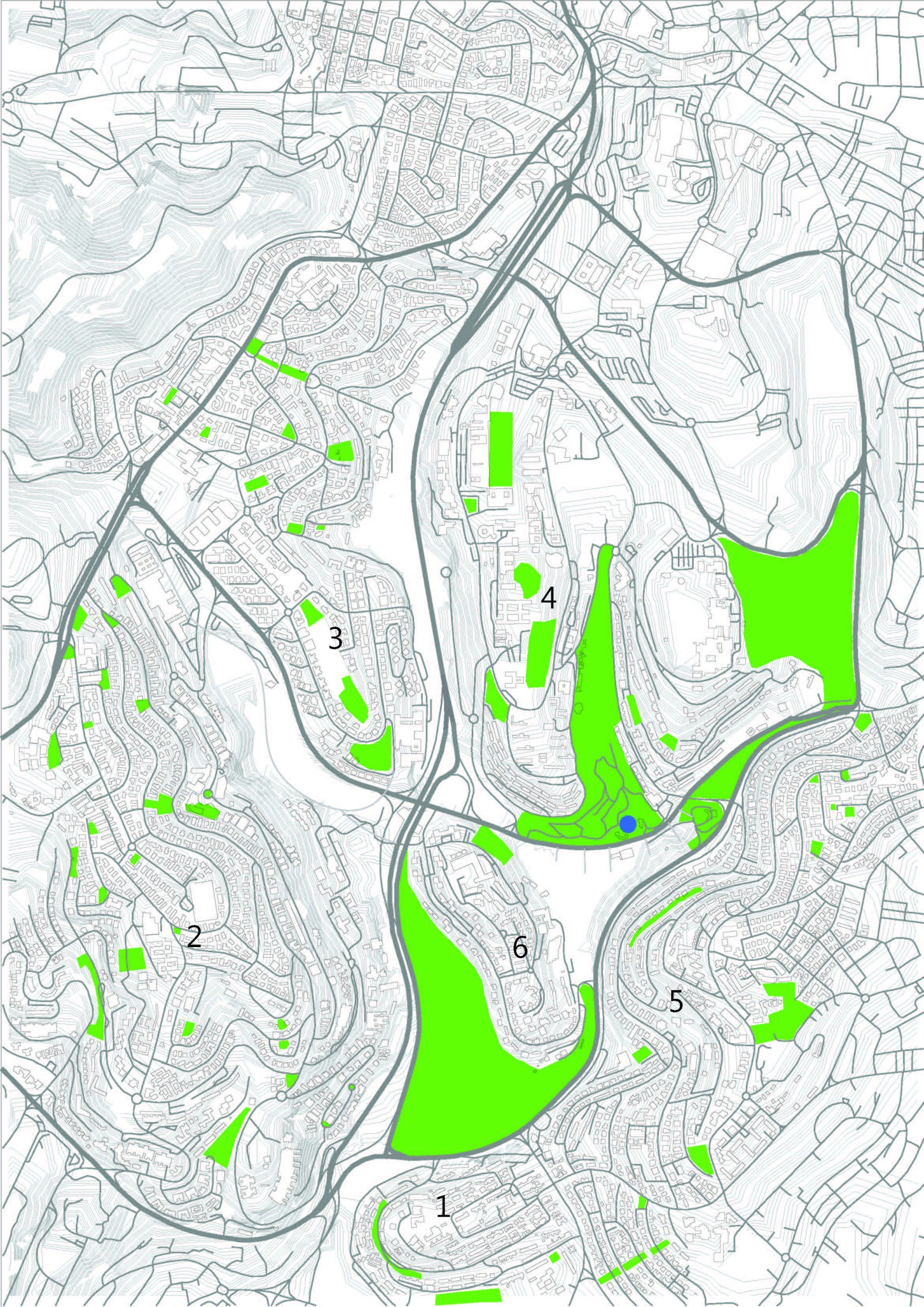 An Enclave is defined as a distinct territorial, cultural, or social unit enclosed within or as if within foreign territory. The term became intriguing to me while observing Jerusalem’s fragmented urban fabric from satellite images. A brief glance at the city’s morphology reveals a loose arrangement of biomorphic shapes emanating from the historic walled old city.  A closer look at these dispersed organic shapes, particularly on the western side of the city, revealed clearly delineated programmatic functions, exclusively associated with each one; university, industrial zone, museum and residential neighborhoods. One of these neighborhoods is the historic Garden City suburb called Beit Hakerem. Built in 1922, the new neighborhood suburb was to provide tranquil housing solutions for new immigrants from Eastern Europe, immersed in open green space and away from the crowded and congested old city environs. Whereas some aspects of the historic garden city have been retained within the core of the neighborhood, the surrounding fabric has been radically transformed by massive highways and roads. Beit Hakerem is both physically, programmatically and socially detached on all sides from the surrounding urban fabric – it is an enclave.

This phenomena, reflecting the transformation of a Garden City suburb within the greater developing urban context, provides us with valuable insight as to how cities have been developing over the past century and what we need to learn from this process.

Although the existence of enclave urbanism can be traced back hundreds of years, it has become a significant   aspect in discourse on urbanism today. The phenomena of urban fragmentation and its social impact is cause for great concern in cities worldwide.

Whereas causes and manifestations  of this phenomena vary, it is often attributed to specific social, political, economic or geographic forces at play. This thesis posits that the development and persistence of enclave urbanism can largely be attributed to Modernist planning modes initiated globally between the end of the nineteenth and the early twentieth centuries. Through the study of the urban development of Jerusalem over the past eighty years, this thesis will trace the evolution of an enclaved city as a reflection of the Modernist ethos

Mappings of built up areas within Jerusalem’s municipal boundaries show a highly fragmented urban structure, composed of a sprawling collection of isolated neighborhoods emanating from the historic center. With a municipal area of 125 km2, 20% larger than the city of Paris’[2] 105 km2, Jerusalem’s density of 6,790/km2 is less than a third of Paris’ 21,500/Km2. The city has become highly non-sustainable with substantial negative migration, a huge lack of housing solutions, and an alarming annual deficit[3]. The natural and perhaps intuitive explanation to this phenomena attributes the cities’ fragmented morphology to both the hilly topography and the complex political, religious and ethnic composition. Although these parameters have certainly played a  significant role in the cities evolution, I posit that their impact is only secondary in effecting enclavism and that other factors have contributed equally to Jerusalem’s urban structure. I further posit, that state planning policy has both exacerbated tendencies in some communities and led to enclavism in others, where it otherwise never would have occurred.

This paper will attempt to define these factors tracing the evolution back to modern modes of thought introduced during the British mandate, through the development of zoning and other planning principles.

Towards the end of 1917, during the final stages of world War One, the British military seized Jerusalem from Ottoman British Empire terminating their four hundred year rule of the city. Ambitious and long term urban planning schemes were immediately set into motion intended to preserve the city holy to the three monotheistic religions  while simultaneously transforming it into a modern city of the twentieth century. During the thirty year Mandate in Palestine, numerous urban schemes were prepared by Charles Ashbee (1922), William McLean (1918), Patrick Geddes (1919) and Henry Kendall (1944). The culminating palimpsest of all of these schemes was the vision of zoned urban structure based primarily on independent neighborhood units clustered as isolated suburbs in the landscape.

While the conception of these suburbs was perhaps appropriate for the emerging settlement of the early years of the twentieth century, future planning policies never evolved in a way which allowed the rapidly growing city to coalesce. Strict adherence to historic planning modes inhibited adaptation necessary to deal with rapid population growth and evolving infrastructure and technology. This thesis presents the argument that enclavism is not a product of ethnic, religious, political or topographic conditions, rather, it is the direct outcome of Modern planning modes unyieldingly embraced over the past eighty years.